Waiting 20 minutes for a coffee at the Tim Hortons on Humber Lakeshore campus has been an everyday struggle for Lakeshore students. Before 8 a.m. classes begin every morning, dozens of students cram in the small building to get their morning coffee fix.

For years, students have been complaining about the slow service. Even though more employees have been added during peak hours, students say they’re still frustrated by the long waits.

Tim Hortons food service director Moshtaq Ahmed acknowledges all the problems and has been demanding change from Humber. However, several challenges are preventing improvements from happening.

“As a district manager, I get a lot of complaints, often regarding long wait times. I understand the perspective of students because if you have a class starting in more than 10 minutes and want a coffee, you should be able to get it without being late,” he says.

Trapped in a declared heritage building

The Lakeshore campus Tim Hortons serves just over 1,000 students per day. Ahmed admits that North Campus has more resources allocated to its location than Lakeshore. With its more elaborate queuing system, self-order kiosks, “drinks only” express line and ample seating, the North campus location serves over 3000 students per day.

“This location needs to expand, but we physically can’t. The building we’re situated in is declared a heritage building. This means that we are unable to break down the walls, add new surface area to the building or do any major renovation to disrupt the overall structure or appearance of the building”, Ahmed says.

The Chartwell Compass Group, the company that manages the Tim Hortons franchise for Humber, oversees the operations of Tim Hortons at the Lakeshore Campus and understands the need for expansion. Ahmed says that the company submitted a proposal two years ago for a building expansion. However, Humber College denied the plan.

Besides the building, the storage room for the café is dysfunctional and has been the number one issue that the employees are facing. The ice machine, baking equipment, and everything that the store needs are stored in L café kitchen instead of in the same building. Employees have to transfer ice, baked goods, and cups every hour from the 2nd floor of L to the Tim Hortons building. This takes time and reduces the number of employees who serve the students during peak hours.

In addition to the problems, Ahmed says the technology in the cafe is old and outdated. He has put in a request for a new cash register and is currently waiting for Tim Hortons approval.

Another significant contributor to Tim Hortons’ lack of efficiency is the staff. Ahmed says that the employees working at the campus Tim Hortons aren’t actually students of Humber College. The employees are contracted out from the school and are actually representatives of the Chartwell Compass Group.

“Many people tend to not realize that every year, we have to layoff staff in April and re-hire new staff in September. Because of this, service may be slower during the first few weeks of the semester, because the employees are still new,” he says.

Students have other coffee options, but the line up for Tim Hortons still continues

While Tim Hortons might be the nearest coffee shop to the L building complex, it is not the only place on L that serves coffee. Students, in fact, have many other options such as “Café On the Go” and the L cafeteria on the 2nd floor that uses a self-service system.

So, why are students still bothering to line up when they can get it faster and make their own double-double?

“The measurement of the milk and sugar from Tims are based on the machine, and I’m used to it. This self-service from Café on the go doesn’t work for me because I never get my coffee right. Sometimes it’s too much milk or too little. I’d rather line up to get my coffee right,” she adds.

While Elvina is all about the right taste of her coffee, tourism management student Hannah White and film media student Jack Sanders are all about the baked goods, breakfast sandwiches, and hash browns.

“Even though the cafeteria also sells them, for some reason they are way more expensive and taste like garbage,” Sanders says.

In an attempt to reduce the line and waiting time, Ahmed says that Compass Group Canada launched a mobile order system from the application called “Boost” last year.

The app allows students to order food and beverages beforehand, so they don’t have to wait in line for it.

“I haven’t actually tried the Boost app, but from the feedback I’ve received, I can confidently say that it is a fast and efficient system,” Ahmed says.

However, the system has not yet proven effective enough to eliminate the line and the waiting time. Most students don’t know about the app even though it launched last year. Also, the number of employees isn’t adequate to handle the service. 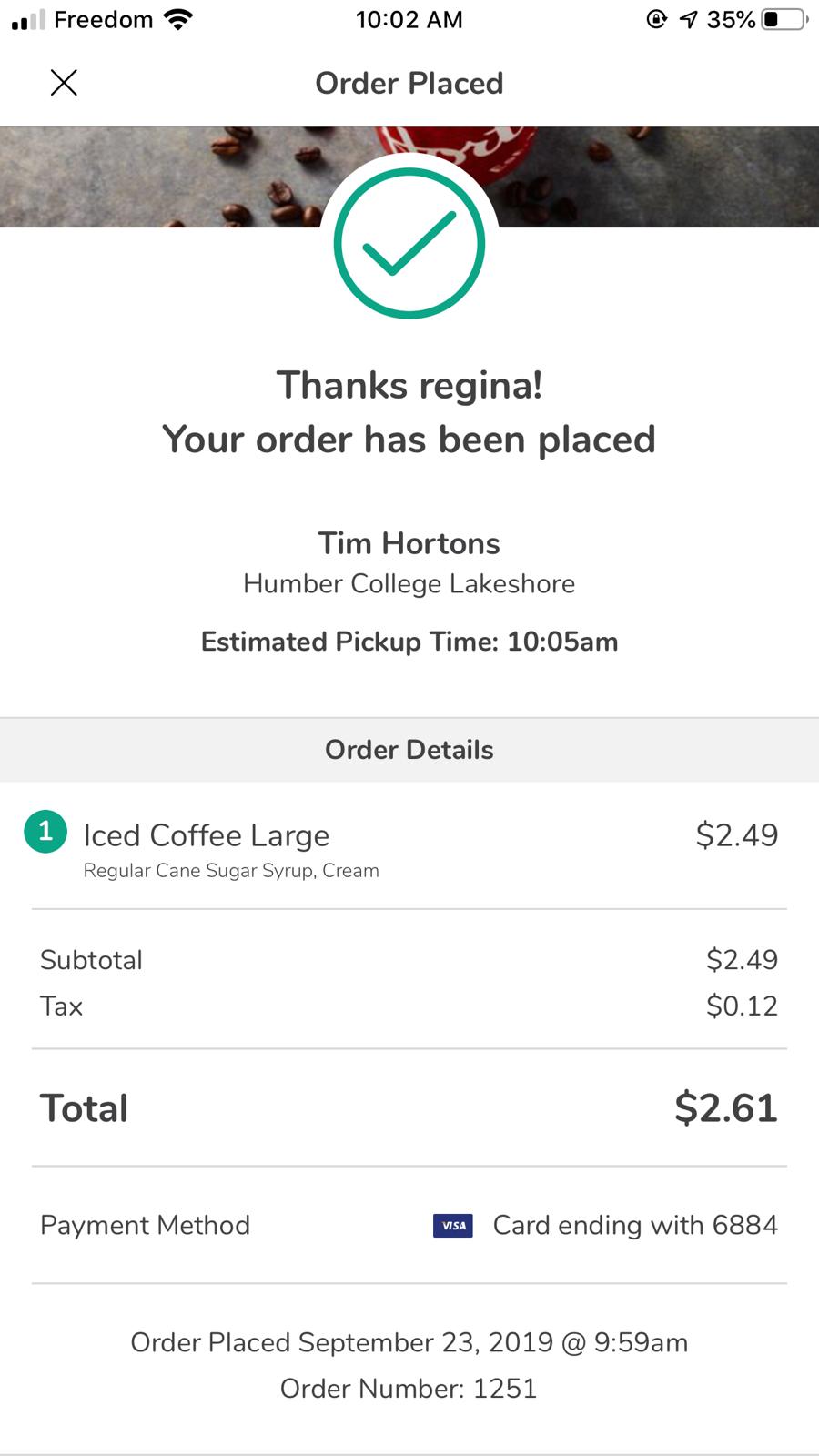 To evaluate the experience, Skedline reporters tried the Boost app. After 15 minutes of waiting, our large iced coffee order was ready. The employee that gave us our order apologized for the wait and said that a “technical error” was the reason for the delay.

Talking about the future of this coffee shop, Ahmed is not sure when or if Humber will grant the permission to expand the building or maybe move the cafe to somewhere else that is more efficient for the students and the employees.

“Things take time to fix, but we’re actively working with what we have,” he says.

A storyteller who loves food, outdoor adventures, travelling, and the hustle of working on a project. I love to do research, create and manage content for videos and social media. I'm a task-oriented person and well-known for my strong adaptability skills. You can always find me eating at a restaurant in downtown Toronto during my free time and swimming at some sea during summer. I might be shy at first, but I won't stop talking once you get to know me. I'm from Jakarta, Indonesia, though, I'm based in Toronto. Wherever you are, I'm always up for doing a collaboration, message me so we can tell a story together! View more posts